Previously in Part 1, we left off discussing field position and expected points, including a breakdown by down. Generally, what was presented could be considered the most top-level results discussion and model definition information without much depth into how we arrived at the model, or detail on how the predictions the model provides generate the expected points.

In order to remedy that, I feel it necessary for us to cover some model building methods. This article will show you how we arrive at the model that we currently have from a modeling perspective. The entire purpose of this series of articles is to show you as transparently as I can how the Expected Points model works, how well it works, and how the model is limited.

Additionally, and maybe most importantly, this research is reproducible. The following link contains an R notebook and supporting figures for the article which should be sufficient to work through (it is large, ~284Mb when unzipped). Link 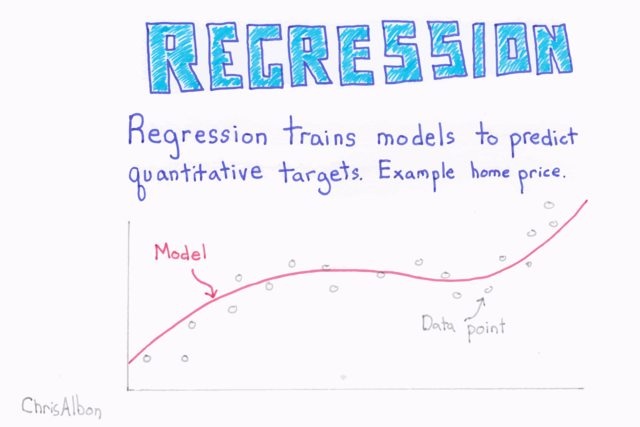 Regression is a set of techniques for estimating relationships between multiple variables on a quantitative target variable, and our focus will be on one of the simplest types of relationships: linear. 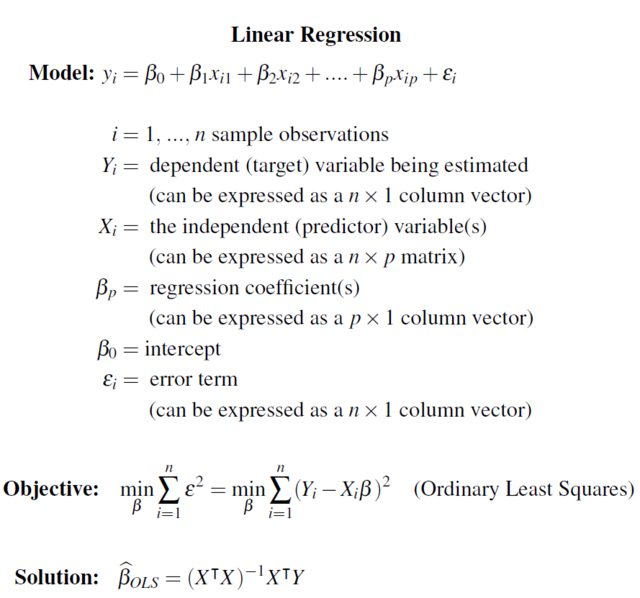 Since scores in football only happen in increments of 2, 3, and 6 (+0, +1, +2), with the additional points in parentheses resulting from extra point attempts, the football scoring scheme is not continuous over an interval or ratio scale without transformation of the target variable.

While pretending I was unaware of the continuous dependent variable assumption of linear regression, I took a look into producing a linear regression model using down, distance, and yards-to-goal as independent variables using a similarly treated college football dataset but excluding all 4th down plays. I tried to predict on either the next score in the half or points on the drive, and the one that demonstrated the highest adjusted R-squared at 0.5143, the others were quite low.

Adjusted R-squared is a measure of the percentage of the dependent variable variation explained by the independent variables, in this case 51.43%. Below is the model summary of this fitting with no intercept. 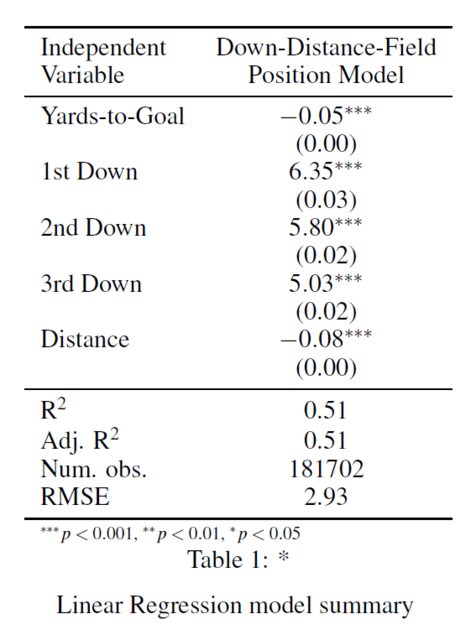 Additionally, the linear model indicates that all three factors are significant at a p=0.001 level, which is at least some evidence that our variables have a relationship with drive points. Here is a plot of the linear regression model fitting. 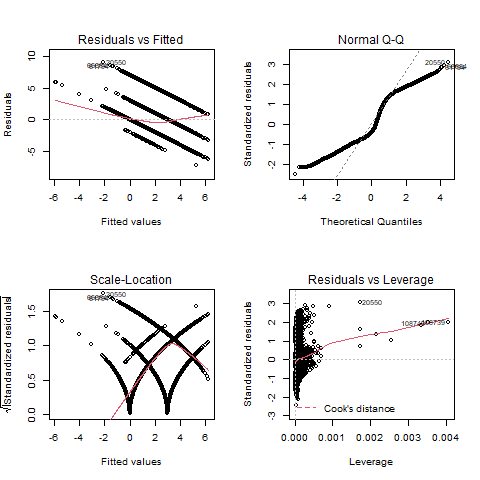 In the plot on the top left, there are 4 distinct scoring types clearly visible and the model is trying to fire a shot through to fit all of them. The red line in the top-left would be relatively flat if the residuals of the model fit had constant variance. While there are two other non-zero scoring types, Field Goals and Opponent Field Goals, the data excluded 4th down, so they do not appear on the plot. For clarity, there are in fact 7 next score types when we include the absence of a score, i.e. “No Score”, since the absence of a scoring event is also a type of next score.

Upon viewing these plots, I quickly realized that several assumptions of linear regression are being violated here, namely the constant variance assumption and normal distribution of error terms (see Figure 4), at minimum. We need to keep adding to our regression toolbox, so let us now take a look at a type of regression that does not restrict us to these assumptions. 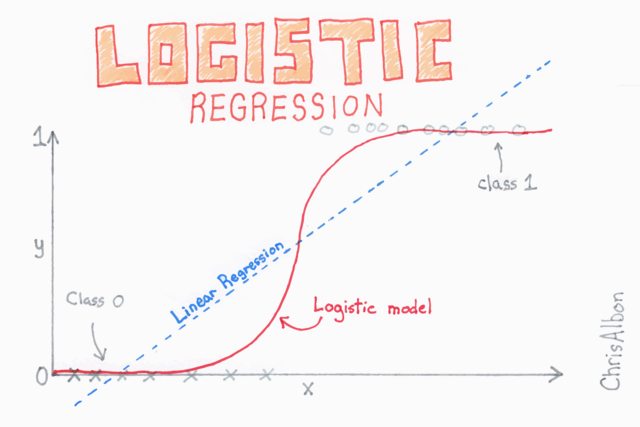 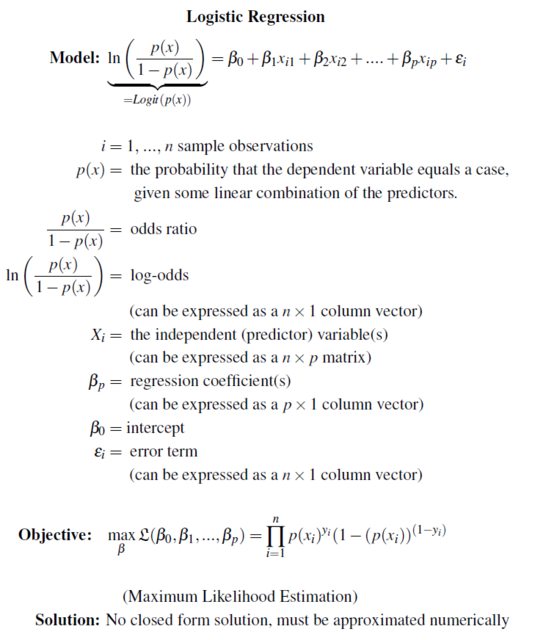 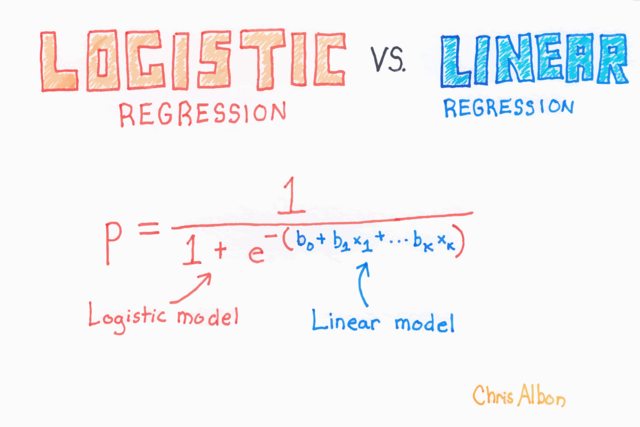 With that background, we can build our model equation with whatever independent variables we choose to include in the model as shown in Figure 8. 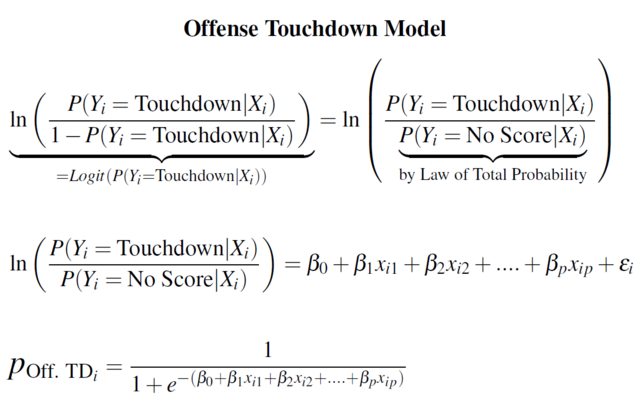 Below is a model fit to the next score offense touchdown variable using the independent variables yards-to-goal, down, distance, and the interaction between down and distance. 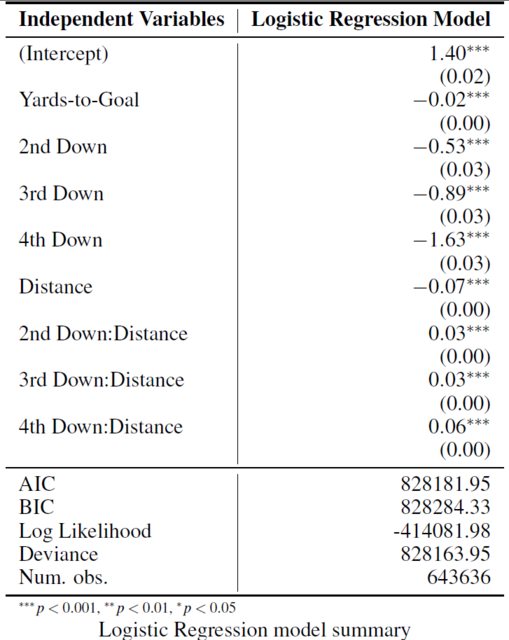 Once again we see that all variables in the model are fit are significant at the p < 0.001 level. In figure 10 below, we can see the probability of the next score in half being a touchdown in relation to field position (yards-to-goal) as the offense progresses down the field. 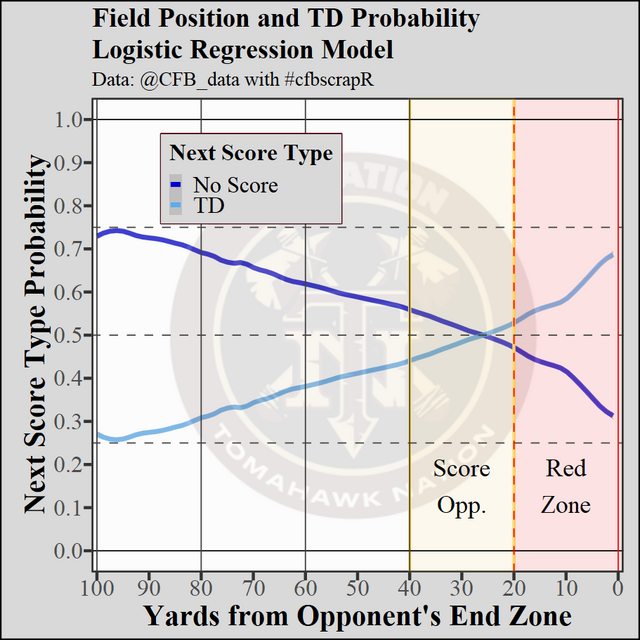 You might be asking “Yeah, that’s great, but you’re still only predicting the probability of one scoring type relative to another. You’d need to do this like 6 times, right?” Well, fair point. How does one do logistic regression on a categorical variable that has more than one class? 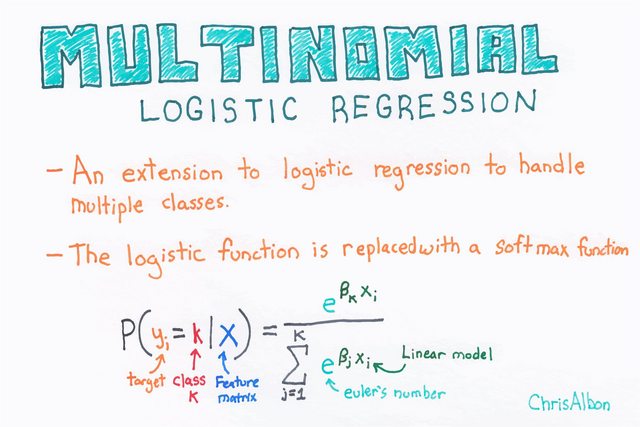 The primary difference between logistic and multinomial logistic regression is the use of the softmax function which re-weights the probabilities generated from each of the individual models so that in total they add to one as seen in Figure 12 below. 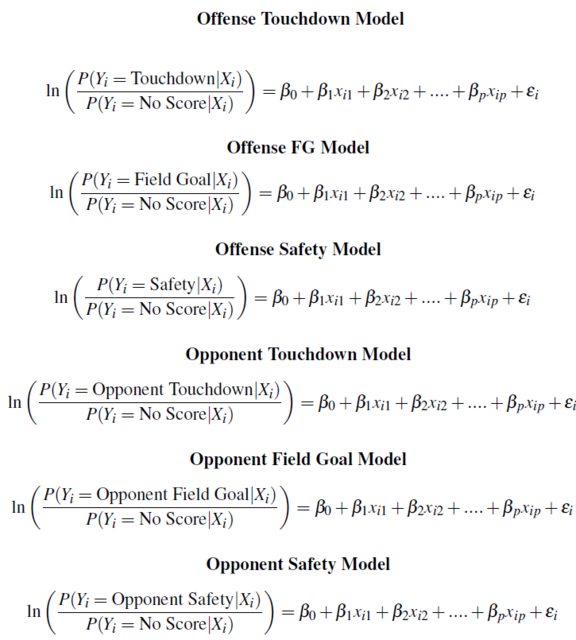 The college football expected points (EP) model is a multinomial logistic regression model which generates probabilities for the possible types of next score events within the same half. In our case, we build 6 logistic regression models fit to the next score types — Offense FG, Offense TD, Offense Safety, Opponent TD, Opponent FG, and Opponent Safety — all except for the class that is used as the base case (i.e. No Score), since that is accounted for in the intercept, as mentioned in Part 1. Ron Yurko, Sam Ventura, and Max Horowitz originally proposed the multinomial logistic regression expected points model for football in 2017, which we will learn more about in Part 3.

Additionally, now that we have a way to calculate the probabilities of scores, we can calculate the expected points. We will discuss this in Part 4.